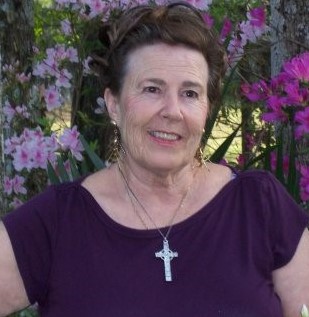 born in Gardiner, Maine to Lewis & Bernice Mooers.  She was a graduate of Gardiner High School and participated in yearly gatherings with classmates (until last year) and was involved in planning Reunions

She was a Military Wife – being stationed in Parris Island, SC; San Diego, CA; Camp Lejeune, NC; Long Island, NY and Argentia, Newfoundland.  She held several jobs including working at a radio station in NY.   When her late husband Larry retired from the USMC they settled in Litchfield, she went to work as the head bookkeeper at the Augusta School Department where she retired from in 1986.

She was an active member of the Litchfield Plains Baptist Church; Augusta Nature Club and the American Legion Auxiliary.  She was a longtime member of the St. Andrews Society of Maine and volunteered at Highland Games at Thomas Point in Brunswick. She was a Den Leader for Boys & Girls Scouts.

In addition to a great love for the Lord, she loved gardening and was proud of her beautiful flowers and vegetables and regularly entered them at the yearly Litchfield Fair. She liked to cook and can; play the piano, swim and boat on Pleasant Pond; spoiling her grandsons, giving haven to several teenagers over the years and above all she loved her family.

She enjoyed traveling with Larry.  They visited Scotland and Moncton, NB where they worked on family genealogies.  They spent time in Moosehead Lake; Loon Mountain; Mexico, Italy, Austria and traveling to Connecticut to spend Thanksgiving with Larry’s brother Ken, his wife Priscilla and family.  They were snowbirds and spent many winters in Florida to get away from Maine weather.

She was predeceased by her parents, her siblings Altha Purdy and Robert Mooers and her husband of 60 years Capt. Larry S. MacFarlane.

She is survived by her children: Michael MacFarlane and significant other Kathy Conroy of Portland; David MacFarlane of Litchfield (who has been her caretaker for the last 8 years); Victoria Veilleux and husband John of Winslow, Maine Grandchildren:  Christopher MacFarlane; Brian, Ian (wife Stephanie) and Kyle Soldano (life partner Anna Dolbow) Greatgrandchildren:  Atreyu, Logan, Maylen and Cameron

Many nieces and nephews.

Family and friends are invited to visit on Thursday, December 9th from noon to 1pm with a funeral service to follow at the funeral home.

In Lieu of flowers- donations may be made to the Travis Mills Foundation, 1002 Watson Pond Rd, Rome, ME 04963 or the Litchfield Plains Baptist Church, 56 Plains Road, Litchfield, Maine.

Arrangements are under the care of Kincer Funeal Home 130 Pleasant St. Richmond, Me 04357