Chicopee, MA-Margaret Elaine Stevens, 91, formerly of Auburn and Canton, Maine died on October 13, 2021 At home, peacefully, with loving family at her side. 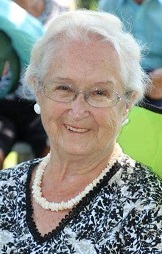 Her favorite club was a Friends and Family Knitting Club, making countless blankets, hats & gloves for friends, family and veterans. She was a member of the American Legion, AMVETs Post 6 and VFW.  Also, Member of Stevens Mills Church, then East Auburn Baptist Church and a regular visitor of Faith Baptist Church.

Margaret enjoyed camping at "The Woodlot" in the Off Grid Camp her and Bradford built. Family trips to the White Mountains and Sebago State Park.

Celebrating her anniversary, every June, at the Skylark Inn in Old Orchard Beach (her "Little Florida").

She was an avid traveler over the years, visiting Disney in Florida, Virginia Beach Virginia, Las Vegas, Fort Hood in Killen Texas and finally all of New England.

She loved having and taking care of animals (cats in particular) and children her entire life.  Margaret loved adventure, Spending lots of time with family in Canton, riding a 4 wheeler for the first time at age 88 and then at 89, jumping off a pontoon boat at her daughter's pond in Livermore.

She worked many years in the local shoe shops (Stride Rite, Knapp Shoe, Belgrade Shoe and Supreme Slippers). After, she worked as the book keeper for Best Trophies in Auburn. Finally retiring as the head of housekeeping at Days Inn (now the Fireside inn) next to the turnpike in Auburn. Also, over the years, Margaret and Bradford have been an integral part of Paine's Incense in Auburn.

A short service will be held at Gracelawn Memorial Park Memorial Park, 980 Turner St, Auburn ME at 10am on Saturday, November 6th.