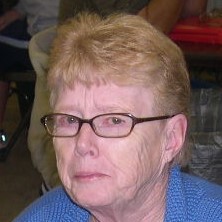 Sandra Louise Bodge, 78, of Zephyrhills FL and of Richmond ME, died July 1,

Born in Brunswick ME November 24th, 1942 to Ralph McIntosh and Roberta (Hammond) Coy.

Her devotion to family and being a caregiver began at an early age.  She gladly gave of herself for over six decades to her children, grandchildren, and great grandchildren.  On June 28th of 1969 she married Michael C. Bodge and they remained together for 52 adventurous years of love.  In her later years she enjoyed crosswords, jigsaw puzzles, and rousing family canasta nights. Always enjoying anything and everything involving her grand and great grandkids to whom she was known for her bracing hugs and kiss showers.

Sandra was known as a hard-working, trustworthy, and dedicated employee and manager in several varied occupations before her retirement years.  In retirement Sandy and Michael set forth on cross-country adventures in the motorhome where they visited 44 different States constantly visiting friends and family along the way.  They settled in Zephyrhills but journeyed back north to Maine every summer to cool off and be with family.