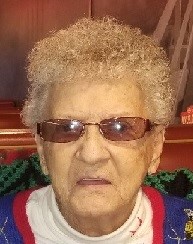 Barbara was born in Mechanic Falls on November 30, 1933 the daughter of Paul and Floris (Hartford) Murray.

Barbara was predeceased by her husband Raymond Gilliam, her parents, her granddaughter Megan Monto, her brothers Bobby Murray, Raymond Murray, and Paul Murray, and her sisters Arlene Dostie, Pauline Hagen, and Shirley Simmons.

There will be a private burial, at a later date, at Gracelawn Memorial Park in Auburn.