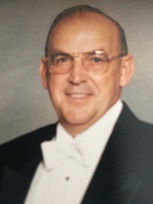 He was born on December 13, 1935 in New Gloucester the son of Ernest Yeaton and Mary Martin.

He graduated from Gardiner High School in 1954.

Ernie worked many jobs in his lifetime, most notably, as the Facility Engineer for Digital Equipment Corporation, Augusta, Maine for 19 years before retiring in 1997. He was also the Town of Pittston’s Code Enforcement Officer for 46 years retiring in 2019. He was a licensed Master Plumber, Master Electrician and Boiler Engineer in the State of Maine.

Ernie was a lifetime member of the Scottish Rite Bodies of Augusta, he achieved the 33rd Degree in 1999, the highest honor of Scottish Rite Freemasonry, a member of the Good Sam’s Club, the East Pittston United Methodist Church and a 52 year Mason of Dresden Lodge #103 A.F. & A.M.

Following retirement, Ernest enjoyed gardening, camping, working on several projects for himself and his family, canoeing, the agricultural fairs, and wintering in Zephyrhills, Florida.  Ernest was passionate about his work and he was very well respected by all who knew him.  Ernest was a dedicated husband, father, grandfather, and was adored by each member of his family.  He gave countless hours and much knowledge to the Town of Pittston.

The family would like to extend a very special thank you to Beacon Hospice, Augusta, Maine for the care, kindness and support to Ernie and his family.

A graveside committal service and gathering to celebrate his life will take place in the spring.