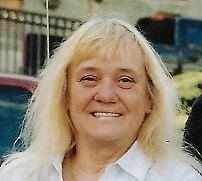 She was born in Augusta on September 13, 1947 the daughter of Linwood and Jessie Moody.

In the spring there will be celebration of life to be announced.