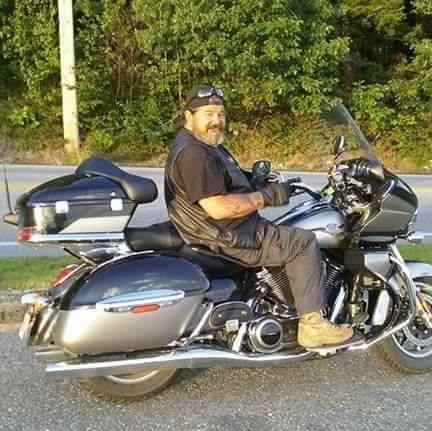 Brewer-Daniel Patrick Gilbride, 53, passed away at Togus VA Hospital on July 15, 2017.  He was born in Brockton, Massachusetts on September 19, 1963 to Faye Gould and Francis Gilbride.  He grew up in Orono on Pushaw Lake. He always remembered and shared many stories about his Gould’s Landing friends.  Danny loved to tell a story.  He enlisted in the US Navy on November 21, 1984 and was honorably discharged on February 26, 1988.  He served on the USS John F. Kennedy and USS Dwight D. Eisenhower.  He lived his life his way, enjoying every moment.  Danny enjoyed fishing, hunting and riding “his bike”.

His parents predeceased Danny.  He is survived by his step-mother, Joan Ames, his sisters Kelly Gould and Joan Carol Ames and his only son, Bohn Gilbride and fiancée Brooke LaBossiere.  His first granddaughter will be arriving in September.

The family would like to thank all those friends who came to visit Danny, especially his Dunkin Bug-Huggers Riders Club.

At Danny’s request there will be no service.  A gathering to celebrate Danny’s life will be announced at a later date.