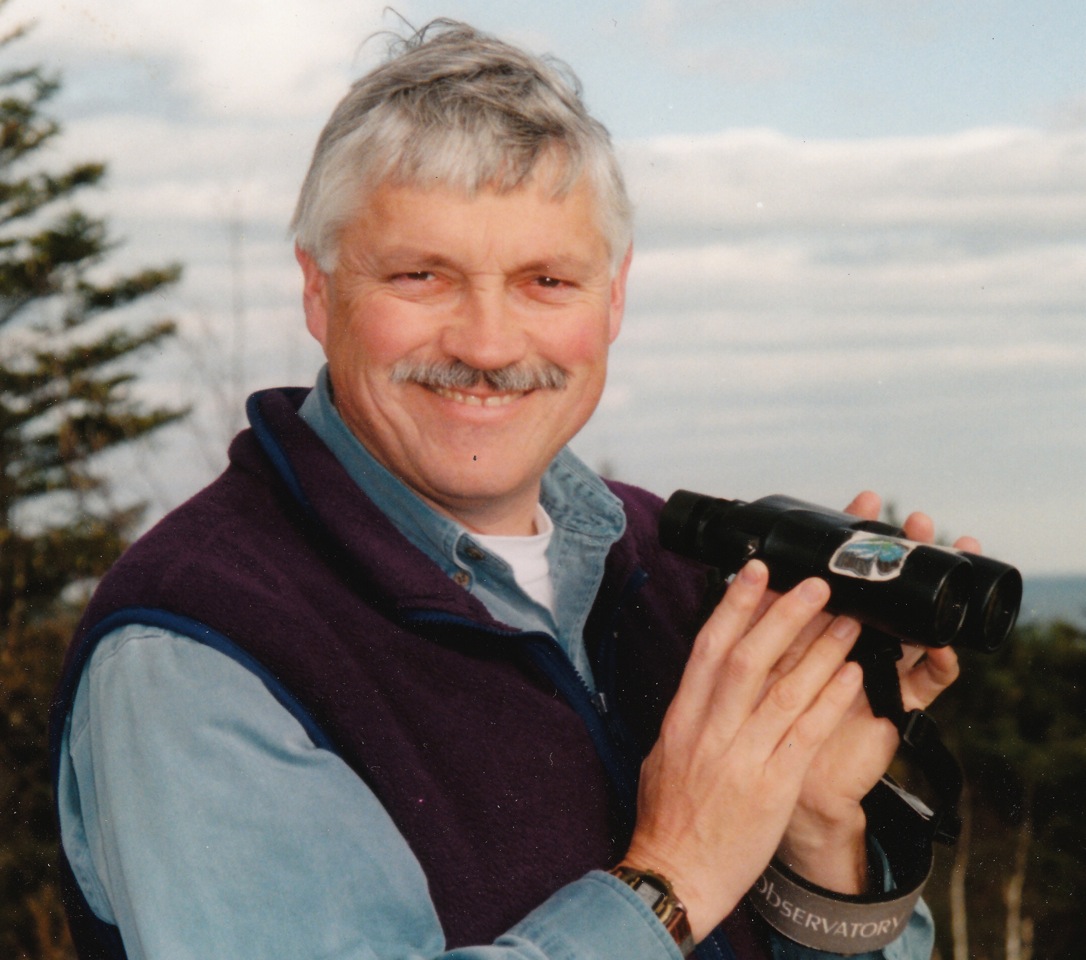 Peter Douglas Vickery, 67, of Richmond, died at his home on the morning of Feb. 28, 2017 after an 18 month battle with cancer. He was born on Nov. 18, 1949 in Oxford, England to Walter Neef Vickery and Eugenia Belikoff Vickery.

Peter’s lifelong passion was birds. He was known throughout Maine and farther afield for his knowledge of Maine’s avifauna, past and present, and his unparalleled skills in field identification. He was also known for his love of sharing his knowledge and inspiring appreciation of birds in others, often inviting curious strangers to have a look through his telescope and explaining what he was looking at. And he was known and loved for his wide open heart, ready smile, warm hugs and enjoyment of all the wonders in the natural world.

Peter was educated at George School, a Quaker school in Bucks County, PA, and earned his B.A. in Literature from Connecticut College in1972. He later went on to develop his avocation into a life-time profession. He completed a M.S. and a Ph.D. in Wildlife Ecology at the University of Maine, earning the award of Outstanding Graduate Student in 1994.  His research in avian ecology, most often focused on grassland birds in Maine, the northeast, Florida and Argentina, led to the publication of over 30 scholarly articles and books with colleagues and his graduate students. The mentoring of graduate students while adjunct faculty at U Mass. Amherst was one of his greatest joys. He is co-author with Jan and Liz Pierson of the popular Birder’s Guide to Maine.

Peter worked for Massachusetts Audubon Society for 23 years until 2001, first as natural history travel leader, leading trips to all seven continents, and then as Avian Ecologist for their Center for Biological Conservation. Since then he had divided his time between biological consulting, serving as instructor in avian ecology at Hog Island Audubon Camp in Bremen, and working on writing Birds of Maine, intended as the first systematic and thorough study of Maine’s birdlife since the classic and widely admired Maine Birds by Ralph Palmer in 1949. Covering 450 species of birds that have occurred in Maine and documenting the many changes that have occurred since the middle of the last century, this is truly the culmination of Peter’s life’s work. When he learned that he was unlikely to be able to complete this work because of his cancer diagnosis he gathered a distinguished team of co-authors to see it through to publication.

While Peter was, famously, always looking at birds, he also loved sports, both as an observer and participant, playing soccer in adult leagues until he was 50 when he took up biking and yoga as safer forms of exercise. He found time to coach his two sons’ peewee soccer teams, and later to root them on at every athletic event he could.

He enjoyed exploring and savoring the natural areas of Maine in all seasons, from fall shorebird migration on Lubec’s tidal flats or warblers on Monhegan Island, boat trips to see the seabirds and whales of the Gulf of Maine, to Christmas Bird Counts in Biddeford and Phippsburg. But his heart’s center was always Morse Mountain in Phippsburg to which he was first introduced by his wife Barbara when he was 15. Peter and Barbara spent as much time as possible there in the last 18 months of his life.

Peter’s passing leaves a giant hole in the hearts of those who knew and loved him. His boundless love, humor and zest for life will be most deeply missed by his wife of 47 years, Barbara St. John Vickery, his sons Gabriel and Simon, his brother Ian Vickery of El Dorado AR, his sister Barbara Skapa of Mt Vernon, ME, his aunt Anne Vickery of London, England, and his half siblings Carl, Eileen, Helen and Tina Vickery. He also will be greatly missed by the extended families of both Vickery and St. John families, a wide circle of friends and one very special Great Pyrenees, Bhalu.

Friends and neighbors in the Richmond area are invited to gather to remember Peter on Friday, March 3, 4-6 pm at Dinsmore Hall, 164 South Pleasant St., Richmond. A memorial service will be held Saturday, April 1 at 2:00 pm at the Phippsburg Congregational Church on the Kennebec.

In lieu of flowers, memorial donations may be made to Birds of Maine Book Fund, Camden National Bank, 111 Main St., Richmond, ME 04357 for book design and art work costs.