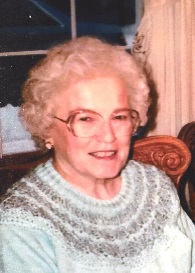 BRUNSWICK - Grace Etta Hunton, 89, of Richmond, died at Horizons Nursing and Rehab Center in Brunswick on January 7, 2017.  She was born in Richmond on June 18, 1927 on Church Street.  She was the daughter of James and Margaret Douglas Nelson.

She was a graduate of Richmond High School Class of 1944.  After graduation, Grace worked for Tillies Beauty Shop as a hairdresser and later worked as a Bank Teller for Depositor’s Trust.  She also worked at Richmond Fuel.  After her retirement with the bank Grace became a beauty consultant for Mary Kay Cosmetics.

She was a dedicated member of the Dresden-Richmond United Methodist Church.  She was once a member of the Order of the Eastern Star and the Beulah Rebekah Lodge #23 of Richmond.

Grace enjoyed spending time with her family and friends.  She especially enjoyed going to church and out to lunch after.  Grace enjoyed being creative by doing many craft projects.  She will be deeply missed by all who knew her.

She was predeceased by her parents, husbands, William I. Vieira and Calvin K. Hunton, and son, Stephen N. Vieira.

Survivors include her daughter, Joan Dyer and husband Dennis of Scarborough, her granddaughters, Ashlee Beeler and husband Matthew of New Gloucester and Kathryn Dyer and partner George Sotiropoulous and great granddaughters, Chloe Grace Beeler and Morgan Mae Beeler of New Gloucester, her loving sister, Sarah Lancaster of Richmond  and cousin Linda Lebel, and nieces and nephews.  The family wishes to thank the staff at Horizons Nursing and Rehab Center and all her family who helped take care of her throughout the later years of her life.

A visiting hour will be held on Sunday January 15 from 1-2 p.m. at the Dresden-Richmond United Methodist Church, 121 Pleasant Street, Richmond where a funeral service will follow at 2 p.m.  Burial in the spring will be at Bayview Cemetery, Bowdoinham.

In lieu of flowers, donations in Grace’s memory may be made to Dresden-Richmond United Methodist Church, 121 Pleasant Street, Richmond, Maine  04357.