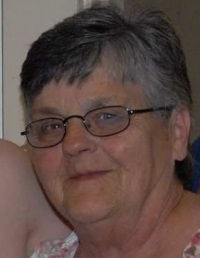 LISBON FALLS - Starr Hardy, 76, of Lisbon Falls passed away on November 27th, 2016 blanketed in deep love and light with her family at home. She possessed a profound, fierce love for her family. Never one to divert from the needs of others, she held each and every one of her family members close to her heart.  She was born December 17th, 1939 in Merrill, Maine to Linwood and Mabel Scott Russell.  She was blessed with four magnificent children; Judy, Linda, Jamie and Michael.

Starr moved to Maine in 1970 as a single mother to raise her four children, providing for them the best way she knew how to. She managed to single-handedly raised all of them to be independent, honest and hardworking individuals and taught them to never lose their deep appreciation for life.

Starr was richly blessed with lots of beautiful grandchildren from early on which kept her on the go and put a sparkle in her eye. You rarely saw Starr alone, for there was always a little set of feet running right behind her wherever she went.  She found a sense of peace when surrounded by her children and their children, and was the cement that held the family so close together.

Starr was employed at LL Bean for many years before choosing to retire early to help care for her two young great-grandsons who had just lost their mother, Kerri McNamara, to melanoma cancer. This was just a small example of her selfless dedication to her family. Several years later, Starr found herself once again doing what she does best, being the rock for her family as they endured the passing of yet another one of her beautiful granddaughters, Penny Patenaude, to breast cancer.

Besides her dedication to those close to her, she also found great pleasure in volunteering for those who were less fortunate than her. She relished in the task of putting smiles on the faces of children with life-threatening illnesses through the Make-A-Wish Foundation, which she joined following the passing of her beloved granddaughter, Kerri. You would also find Starr helping out in all aspects at the Lisbon Thanksgiving dinner every November. She was tremendously instrumental in organizing the annual Lisbon Area Giving Tree Project, working side-by-side with her daughter, Judy, making sure all children woke up to Christmas gifts under their tree on Christmas morning.

Star was predeceased by her parents, Mabel and Linwood Russell, her siblings Ethel and Andrew Russell who passed away as infants, Scott Russell and Earlene Nadeau who also lost their fight against cancer, her beloved granddaughters, Kerri McNamara and Penny Patenaude, and a niece, Mary Ann Nadeau.

Starr leaves a massive hole in the hearts of her loving family and friends.  She will be missed for her mischievous smile, her quick and witty responses and most of all, her unconditional love.

A graveside service will be held on Friday, December 2nd, 2016 at 1 p.m. at Hillside cemetery in Lisbon Falls.  A Celebration of life will immediately follow at the Lower Club/Slovak Association in Lisbon Falls.