Dresden-Joseph Atkinson, beloved father, devoted husband, passed away at home on November 9, 2016 with his wife by his side.  Born in Worcester, son of Muriel and Joseph Atkinson, Joe was educated in the Orono school system and graduated from the University of Maine with an engineering degree in 1971.  He married his childhood sweetheart, Deborah (Fletcher), on a snowy day during the University of Maine winter break in 1971. 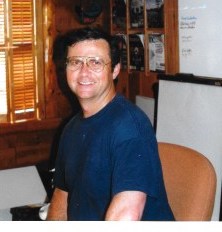 A man who did not shy away from hard work, Joe always had a project going, working on a car, harvesting his own firewood, or creating wonders with wood.   One of his favorite projects was adding a two-story addition on his house; designing it, sawing the logs with his wife and two sons, fitting the logs, laying the slate floor, all through to completion.  He was a master woodworker, and we are very fortunate to see his craftsmanship all around us.

Joe was always willing to lend a hand and was incredibly active with the Masons.   He was both a York Rite and a Scottish Ride Mason, of the 33º.    He coordinated the delivery of Thanksgiving meals, planned Family Life Night, and also lead the essay about the value of family.

A life-long member of the NRA, Joe was an avid hunter and outdoors-man, taking one of the dogs and a stack of pancakes out with him in the early dawn.  Joe was also a wonderful, enthusiastic storyteller.  He will be greatly missed.

He is survived by his wife of 45-years Deborah, of Dresden, who he knew he wanted to marry when she was thirteen, his brother Russell Atkinson of Meriden, CT, and his wife Gail, and his sister Joyce Willette of Bangor.  He is also survived by his son Fletcher and partner Heidi Smith, and their children, Wyatt and Harper, of Chelsea, and his son Joshua and his wife Erica, of Dresden.  A Masonic Memorial service will be held on Saturday, November 19th at 1 p.m. at the Kincer Funeral Home 130 Pleasant St. Richmond.

In lieu of flowers, donations can be made to the charity of your choice.