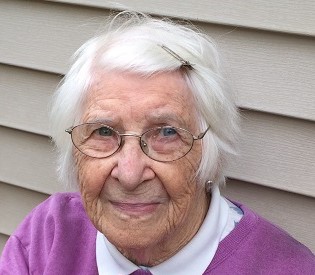 Bowdoinham-After suffering a stroke last year, Pearle Temple never complained, maintaining a brave and cheerful outlook, even after several falls and other illnesses, hospitalizations and pain. She passed on September 14th 2016.

Pearle was born November 23, 1922, and grew up in Sherman Mills Maine.  After graduation from high school she moved to Portland, Maine where she worked for Southworth as a “Rosie the Riveter”, making airplane parts during WWII.  On weekends she would take the train to Bowdoinham and stay with her sister and brother-in-law Arlene and Granville Frank.  It was there that she met Hollis Temple. It was not long before the two were married in October 1946. They lived their entire 60 years of marriage in Bowdoinham.

Before her illness, Pearle was an avid bowler participating in many Senior Olympic Games around the country with her husband Hollis.  They both achieved many medals.  She loved being outdoors, working in the yard, gardening and hiking.  She absolutely loved digging and eating dandelion greens and called them the best food on the planet.  Pearle and Hollis loved to travel on their motorcycle to such places as the entire perimeter of the continental United States, as well as Alaska (of course this was in their 70’s and 80’s).  She was also an award winning traditional quilter who took delight in giving away her many creations. She enjoyed camping and fishing in northern Maine.  She traveled to Newfoundland, and throughout Canada, Hawaii, England and Scotland, Ireland and her beloved Isle of Man.

Pearle was an avid reader – of the newspaper, biographies, mysteries, and most anything WWII.  She loved watching golf on TV (always saying “Tiger fell from Grace…and he’ll never be the same”… she was right!).  She loved corresponding with her sisters, her nieces, and her nephews. She and her sisters were clever in writing, especially in creating rhymes and poems.  With two of her sisters they recreated the story of the Lewis and Clark Expedition, and would reenact it on family visits (It was hilarious).  Pearle loved hosting family and friends that came to visit.

Her family is respecting her wishes that there be no calling hours or public services. She wanted to be remembered as she had last been seen by those who cared for her while she was alive.

In lieu of flowers, donations can be made to Freeport Nursing Home Music & Memorys Program (or donate a new or used ipod) or to CHANS HOSPICE.

Pearle’s family would like to thank her doctor Timothy Howe and his staff for almost 30 years of care and compassion, Freeport Nursing Home for their unconditional care and outstanding support during her time there and to Chans Hospice for their Nursing Services, Social Services and volunteers, as well as, being her advocate and support to the family.