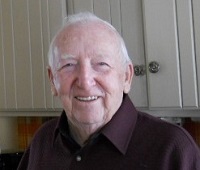 He was born on April 14, 1926 the son of Margaret (Dowling) and William A. Shea, Sr.  He attended Gardiner High School and the Kennebec School of Commerce.

Bill served his country during WWII with the US Army.  His tour of duty included Hawaii, Saipan, Okinawa and the Philippine Islands.  He was employed for many years by the Veterans’ Administration at Togus until his retirement in 1981.

In 1951, Bill married Rachel E. Dennis and together they raised three children.  He is predeceased by his parents, a brother James Shea and a sister Constance Hinkley.

A Funeral Mass will be held at St. Joseph’s Catholic Church in Gardiner on Thursday, August 25, 2016 at 10:30 a.m. followed by a military committal service at the Maine Veterans’ Cemetery on Mount Vernon Road in Augusta.

A Celebration of his life will be held at the VFW Post 887, Leighton Rd. Augusta following the committal service.