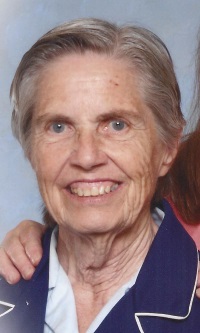 PITTSTON - Emily Drake Allen, 81, went to be with her Lord and Saviour on Thursday, August 4, 2016.  She was born Jan 19, 1935 in Canton, Maine, the daughter of Henry Drake Sr. and Ruby (Chamberlin) Drake. She graduated from Livermore Falls High School class of 1954.

She married Chester Allen on March 30, 1955 in Livermore Falls and resided in Richmond, Maine for 50 years prior to moving to Pittston.  Emily worked for many years farming and transporting young special needs children to and from Richmond and Oakland schools.  She loved reading books, playing board games, driving through the country-side, and spending time creating special memories with her grandchildren.

She was predeceased by her parents Henry and Ruby Drake, her husband Chester Allen, and a sister Dawn Drake.

She is survived by her daughter, Debbie Young and her husband Doug of Pittston; her granddaughter Carrie Day and fiancé Shane Morris of Waynesville, Mo.; her grandson Troy Day and his wife Kate of Farmingdale; a step great granddaughter, Sasha Romney of Waynesville, Mo.; a great granddaughter Aaralyn Beckim of Farmingdale; brothers, Henry Drake Jr and wife Corrine of Kents Hill; and Glendon Drake and wife Sandra of Hebron; and one sister Sylvia Allen of West Paris.

A time of Visitation will be held on Tuesday, August 16, 2016 from 5 to 7 p.m. at Kincer Funeral Home in Richmond.  A Funeral service will take place the following day, August 17, at 11 a.m. at the Lighthouse Baptist Church, 108 Maple Street in Farmingdale, with burial to follow at Maine Veterans’ Cemetery on Mt. Vernon Road in Augusta.

In lieu of flowers, donations may be made in Emily’s memory to the mission funds at Lighthouse Baptist Church, 108 Maple St, Farmingdale, ME 04344.