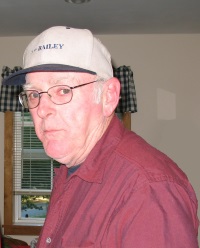 WISCASSET – Donald H. Smith, 70, of Wiscasset died on Thursday, July 7, 2016 at Maine General in Augusta, surrounded by his family.

He attended Bath schools and graduated from Morse High School in 1965.

Don loved the outdoors, and feeding the birds.  Some of his favorite things to do were golfing, hunting, fishing, and camping at Cathedral Pines in Eustis and Townline on Damariscotta Lake with his wife, Faye, and family.  He also enjoyed being with his grandkids.  Don had a special spot in his heart for his dogs: Sam, Shadow and Bella.   They brought great joy for Faye and Don.

He worked at Bowdoin College in the carpenter shop from 1979 until he retired in 2011.

Don was predeceased by his parents, Wilden and Hazel Smith , his sister, Barbara Martin, his son, Donald H. Smith Jr, and his beloved wife of 50 years, Faye W. Smith.

He is survived by his son, Michael Smith and wife Beth; grandsons, Steven and Matthew Smith; daughter-in-law, Janet Smith; and granddaughter, Kirsten Smith, all of Wiscasset.  Don is also survived by his brother Kenneth and his wife Sue of North Carolina, and sisters Gloria Rheaume of Montana, Doris Avery of Alabama and Pat of Maine, as well as many nieces and nephews.

In lieu of flowers, donations may be made to the Lincoln County Animal Shelter, PO Box 7, Edgecomb, ME 04556.