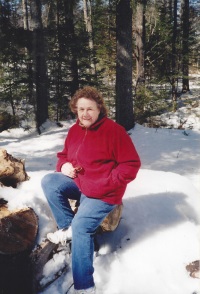 She was born in Alna on March 19, 1931.  She was the daughter of William and Minnie Smith, also of Alna.

Louise graduated the 8th grade from Alna School.  While in school she worked at the Wiscasset Inn, and after getting married on November 3, 1948 she worked at the Dodge Inn and the Dog House Restaurant.  In 1952 they moved to Florida for six months before moving back to Maine.

She worked at the Boothbay Freezer, Wiscasset Laundromat, and Boothbay Schools cleaning.

She enjoyed being a home maker, housewife, and grandmother.

Louise loved the outdoors, hunting, gardening, and taking rides up North to God’s country with her family to see the wildlife and beautiful scenery.  She loved to take long walks with her sister, Alice, on the Woods Road of Alna.  Having cookouts with her family, spending time with her grandchildren and great grandchildren, and seeing the smiles on their faces always made her day!

Louise was predeceased by her brothers Joseph Smith of Windsor, Harry Smith Sr. of South Berwick, and Leon Smith of Wiscasset.

She is survived by her husband of 68 years, Robert H. Baird Sr. of Alna; her two daughters, Janice L. Baird, 67, of Alna, and Carol A. Small and her husband Alan of Alna; her two sons, Robert H. Baird Jr. (Bobby) and John R. H. Baird, 51, of Alna; and Tim Pearson of Wiscasset whom she thought of as a son.  She is also survived by two granddaughters, Kimberly A. Small of Nobleboro, and Melissa Lynn Small and her fiancé Richard Russomano of Augusta; her three great grandchildren, Dalton and Carter Taylor, and Isabella Russomano; and her sister, Alice Murphy of Wiscasset.

A Memorial Service will be held at the Alna Baptist Church in Alna, Maine on Saturday, July 16, 2016 at 1pm.  There will be a gathering with food and drink afterwards.