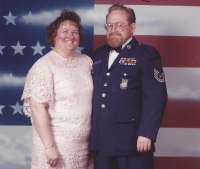 He entered the Air Force at age 18 after graduating from Gardiner Area High School in 1968. While in the service he served his country as a firefighter and fire inspector. After retiring from the Air Force in July 1988 Theodore became employed by Togus VA where he retired in2003.

Theodore was affectionately known to his wife, children, grandchildren and great grandchildren as “grumpy.” He enjoyed nothing more than spoiling them and teaching them how to make a mess for which in true grumpy style, he never made them clean up. He loved his family and was often called upon for help fixing a car, the use of his garage and tools that he loved tinkering with so much and rescuing his children from various catastrophes like running out of gas or a last minute favor. He rarely complained and often liked to lovingly poke fun at his family to their amusement.

Theodore was a rare and unique man who was unapologetically honest and gained the respect and trust of all who knew him. He had a grin that told you right away he was up to no good but was most likely just harmless fun. He was the embodiment of a true “Mainer” and an enthusiast of the many uses for duct tape. He will be missed deeply and forever by his loved ones.

Theodore is survived by his wife of 25 years Dixie Levitt, sons Philip and Edwin Leavitt. Two step daughters Selena Lawrence and Joyce Salzman. He was also survived by his mother in law Rosalie Andrews, as well as his brothers George, Jimmy and Leroy Leavitt. Sisters Violet Nolan and Sandra Bowman .His 7 grandchildren and 4 great grandchildren as well as many nieces, nephews, sister and brothers in law. He was predeceased by his parents Edwin Ray Leavitt and Winola Leavitt.

Family and friends are invited to visit on Monday, May 19th from 4 to 7pm at Kincer Funeral Home in Richmond. A funeral will be held on the 28th of May at 12:00pm at the Maine Veterans Cemetery Mt. Vernon Rd. in Augusta.