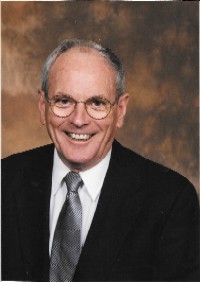 Myles A. Cambridge Sr., 83 of Portland, peacefully passed away on April 13, 2014 at Sedgewood Commons in Falmouth.

Myles, born on August 11, 1930, was the sixth of seven children born to parents John Alden Cambridge and Rhoda Zwicker Cambridge.  As a graduate of DeeringHigh School in 1948 he went on to attend and graduate from PortlandJunior College in 1950 and MountUnionCollege in Alliance, Ohio in 1952 with a degree in economics. Myles was a member of the Pi Gamma Mu Honor Society and was elected to the Sigma Alpha Epsilon fraternity.

In 1948, Myles entered the U.S. Naval Reserves and served in active duty until 1952. Myles married his wife of 62 years, Janice Arlene Hanninger Cambridge, on June 14, 1952. As a Seaman 1st Class he was stationed on the Aircraft Carrier USS Antietam, the first Canted Deck Aircraft Carrier where he served in the Gunnery Office and as Captain’s Talker.  He was honorably discharged in 1955.

Myles had a long and fulfilling professional career with the New England Telephone Co., later acquired by Verizon, from 1954 until his retirement in 1982.  Outside of his management career in sales, Myles was passionately involved with the Masonic Order.   He was a member of the Deering Blue Lodge, AF & AM, The Ancient Accepted Scottish Rite, Valley of Portland, Kora Shrine of Lewiston, ME, Kora Shrine Club of Greater Portland, Kora Lakes Region Shrine Club, Androscoggin Shrine Club and a longtime member of the Kora Highlanders traveling and playing to perform with his Scottish drum.  He was elected to the Royal Order of Jesters.  Myles was an active member of the UnitedMethodistChurch, holding several offices over the years.

An active outdoorsman, Myles loved to spend time in the woods of Maine hunting and fishing with his closest friends.  Frequently he had a project going in his woodworking shop, building or refinishing furniture for his and his children’s homes.  Myles enjoyed the challenge of building rock walls and walkways.

A jokester to his core, Myles delighted in playing little pranks and putting a smile on the faces of those around him. He shared his lifelong love of music and exceptional sense of rhythm via his harmonica, drum, concertina and piano.

A funeral service/celebration of life will take place on Tuesday, April 22nd at 10:30 at Evergreen Cemetery, Stevens Ave. Portland, with military honors.

The family would like to express their sincere gratitude to Hospice and the staff of Sedgewood Commons for the exceptional care Myles received.

In lieu of flowers please consider making a donation in Myles’ name to the ShrineHospital, 516 Carew St, Springfield, MA .