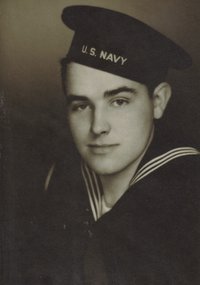 Erland A Tourtelotte JR. 88 of Bowdoinham Maine passed away April 8, 2014 at Mid Coast Hospital in Brunswick.

Erland was born in Ellsworth Maine on March 20, 1926 to Lottie (Dunton) and Erland Tourtelotte Sr.

At 16 Junior moved to Bowdoinham from Washington County where he met his wife Mildred Temple. Junior joined the Navy in 1943 and after boot camp was assigned to LST 1018 where he was involved in 6 D-Day operations in the Pacific Theater including all Philippine invasions.

Junior was an avid outdoorsman both in work and play he was a truck driver, lobstermen, logger, and carpenter. He loved hunting and fishing with his family.  Junior enjoyed cooking and took pride in his good old fashion baked beans.

After the war Junior returned home and married Mildred in 1946.  They settled in Bowdoinham where they raised their 4 children.

Junior was predeceased by his parents and five brothers, Chester, Vernie, Arnold, Dale and Caroll.

He is survived by his wife Mildred, his daughter Kathleen Jennings and husband Ryan of Bowdoinham; Vernon and his wife JoAnn of Pittston; Daniel and Deb of Parkman; and Douglas and wife Ann of Bowdoinham. He had nine grand children Chris of Georgia, Melissa of Michigan, Matt of Bowdoinham, Jennifer of Pittston, Daniel of Augusta, Peggy of Virginia, Eric of Garland, Joseph of Brunswick and Joel of Willimantic. Two step grand children Adam and Casey. He also had many great grand children and nieces and nephews.

At the request of deceased there will be no funeral service. There will be an opportunity to pay your respects to the family Sunday April 13th from 1:00pm to 4:00pm at the home of Doug Tourtelotte, 369 Millay Road, Bowdoinham.

In lieu of flowers, memorial donations may be made to Bowdoinham Church of the Nazarene  Youth Group, 7 School Street Bowdoinham Maine 04008. Condolences may be expressed at KincerFuneralHome.com