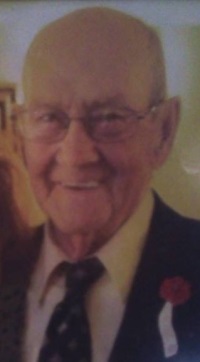 NEW GLOUCESTER - James McKay,greatly loved father, grandfather and friend, 94 years old, died December 19, 2014 at the Veterans Hospice Center in Augusta surrounded by his loving family. He was born December 23, 1919 in Bangor, son of the late Augustine and Beatrice McKay. James was a foster child and was raised in Auburn by the Bergeron family. He attended the Hardscrabble school in Auburn.

James met the love of his life, Anita, at the age of 11. He then went on to bravely serve his country during WWII, as a Staff Sargent in the United States Army’s “Big Red One” Division, MOS: Motor Transport Eco 01, Qualification Medical Badge 12 Sep 1945. He served in campaigns across multiple theaters, including the tank battles of Algeria French Morocco, the liberation of Sicily; continuing on by the “luck of the Irish” he survived the first wave assaults on Normandy, France, and then the push through the Northern France Theatre to the Rhineland. He modestly accepted awards including the Bronze Star and Silver Star; he never spoke of his experiences until his later years, and always credited his “Heavenly Father” with surviving his time spent fighting the Nazi’s.

He returned home from his time in service and married Anita Bergeron and together they raised a family while James worked as a plumber. Eventually James took over the Bergeron family dairy farm in New Gloucester, where the door was always open to those in need. His wife treated and fed everyone who entered her house as family. They had many wonderful years together before Anita’s passing on Christmas, 2001. James and Anita proudly devoted their lives to their 8 children; two sons Johnny McKay (deceased); and James R. McKay and Wife Sally of New Gloucester; six daughters: MaryAnne O’marrow of Auburn; Margaret and Husband Melvin Heath of Poland; Martha and husband Terri Pulcifer of Mapleton; Marlene and husband Ron Whittier of New Gloucester; Marjory Brown of Portsmouth Virginia; and Marlissa and husband Tracy Butler of Chesapeake Virginia. James and Anita’s constant devotion to their family rewarded them with 21 grandchildren, who intern and gave them 33 Great grandchildren. James and Anita lived their lives by a simple principle: “Live by the love of God, always forgive and do good by others”.

A funeral mass will be held at the Sacred Heart Church in Auburn at 11:00am on December 23, 2014, followed by a military committal at Saint Peter and Paul cemetery in Lewiston. Memorial donations may be made to VA Togus Hospice, 1 VA Center Dr. Augusta, Me 04330.

Arrangements are under the care and guidance of Kincer Funeral Home, 130 Pleasant St., Richmond.