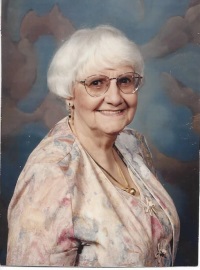 She was a graduate of Newburyport High School. Shortly after graduating, she married Alfred Manson and together they shared 46 years of marriage before his passing in 1990. They had four children, and upon Alfred’s retirement after 28 years’ service in the Navy in 1971 they moved to Alna where they raised their two youngest children. Dede was a lifelong animal lover and rescued many domestic and wild animals during her lifetime. She was extremely crafty and loved painting, needlework, and quilting. She was also an avid reader. When her grandchildren were little she enjoyed rocking them while singing them to sleep with her lullabies. She always looked forward to going out to eat, and shopping with her friends.     She was predeceased by her parents, her husband Alfred Manson, and was the last survivor of a large family.

She is survived by her son, Alfred Manson Jr. of Union; a daughter Pamela McCloud and her husband Ed of Corona, CA; a daughter Robin Manson and her spouse Fran Marquis of Brunswick; a son Timothy Manson and his wife Lori of Bowdoin; five grandchildren, and seven great-grandchildren.

In lieu of flowers, memorial donations may be made in Dede’s name to the Coastal Humane Society, 190 Pleasant Street, Brunswick, ME 04011.

A Celebration of Dede’s life will be announced at a later date.