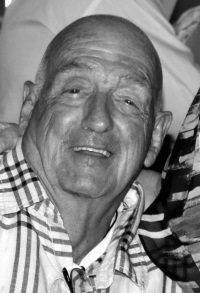 RICHMOND-Gerald A. Brown of 289 Front Street bounded for our heavenly home October 21, 2014 with his family by his side.

He was born on November 4, 1937 in Mexico, Maine, son of Alfred Brown and Nona Fogg. He moved at about age 5 and he lived amongst the Richmond townspeople for the majority of his life where he became well known and a respected member of the community. On October 17, 1959 he married Ruth Austin, and they just celebrated their 55th wedding anniversary at the home they have in been in their entire life together.

Gerry had many jobs over the years, including taking the office of Town Clerk for 16 plus years, Richmond Police, Richmond Fire Fighter, Bail Commissioner, Etonic Shoe Company for many years, member of the National Guard for 11 years, along with service as an insurance agent for Metropolitan Life.

Gerry was active in Boy Scouts of America as a den leader, and he was a proud member the Richmond Masonic Lodge. For many years, camping with his wife Ruth and kids and grandkids was his passion, spending many entire summers at Sunset View and Green Valley campgrounds. In recent years Gerry was known for his treks around town in his power wheelchair with his little dog Louie either sitting in his lap or appearing to pull him down the road. Gerry loved to read and sit out on his porch in the sun, but his biggest love was his family, his wife and children, then watching his grandchildren grow and his newest generation of great grandchildren. Gerry always had a smile on his face regardless of what life dished out, but was happiest when family was around.

Gerry will be sadly missed by his very large extended family. He is survived by his wife Ruth, his children Kelley Harrington, Jeffrey Brown, Steven Brown Sr., and his fiancée Kerri Hanscom, his nine grandchildren Nicholas Purnell and wife Jamie, Sean Harrington, Brandon Harrington, Lindsey Harrington, Courtney McGinnis and her husband Corey, Steven Brown Jr. and his wife Anna, Elizabeth Brown, Joshua Brown and his wife Brittany, and Matthew Brown and his five great- grandchildren Zeb, Ian, Ava, Adelina, Gabriel, with a sixth on the way.

His surviving and loving family members also include brothers Alton, Charles, Darryl and his wife Penny, Austin and his wife Joann, Neal and his wife Pricilla, and sister Arlene, sister-in-laws, Stella Brown and Nancy Brown, and many cousins, nieces and nephews.

He is predeceased his brothers Donald, George, and Clyde and his sisters Sylvia, Madge, Madeline, Shirley, and Norma, brother-in-law Ray Geddes and sister-in-law Doris Brown.

Visiting hours will be at Kincer Funeral Home on Pleasant St. in Richmond at 1pm Saturday, October 25. The funeral service will follow at 2pm and the burial will be at the cemetery on Main St. immediately thereafter. In lieu of flowers friends may donate to the Richmond General Assistance fund, the Richmond Food Pantry, or any other charity in the Richmond area, as Gerry was always trying to help others here in the town of Richmond. Gerry Brown was an inspiration to many and will be sadly missed.