Dresden-Leonard Byron Hook, 81, of Blinn Hill Rd. passed away peacefully October 21, 2014 at Mid Coast Hospital with his family by his side. 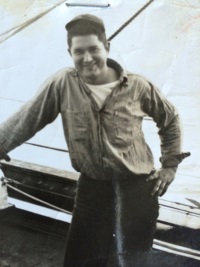 eonard was born April 12, 1933 to Prentis and Mary Ellen Hook in San Augustine, Texas.   Graduating from Pascal High School in Fort Worth, Texas in 1951. Shortly after graduating Leonard joined the US Navy and served in the Korean and Vietnam wars, retiring after 25 years serving his country as a Master Chief Petty Officer. After retiring from the Navy Leonard moved his family to Maine and worked as a Quality Assurance Supervisor for Supervisor of Shipbuiding at Bath Iron Works for 21 years .

Leonard was known for many things, especially his love of gardening and smoking meats for his famous Texas BBQs to share with his family and friends all served with a smile and a “Little Texas humor”. His love of traveling and visiting his family in Texas and his children wherever they might be around the world.

Leonard is survived by his sisters Sue and her husband Jesse Garsee, Barbara and her husband James Wingo, Pamela Smith and several nephews and his beloved Uncle Robert all of Texas.   His extended family Carolyn Robinson, her daughter Lynette and her husband Craig and her son Alan of Warren Maine.

A gathering will be held at Kincer Funeral Home on Friday, October 24th from 4 to 5pm with a service to follow at 5pm at the funeral home. A celebration of life will follow the service at The Old Goat Main St. Richmond Maine.

In Leonard’s memory donations may be made to Mid Coast Hospital Hospice and Palliative Care Brunswick, Me 04011