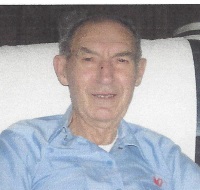 Chet was born on November 6, 1926 in West Paris, Maine. He was the son of Arthur and Mildred (Rowe) Allen. He attended North Paris and Sumner schools.
He spent 2 years in the Army during the Korean Conflict. Chet was employed on his father’s dairy farm and continued farming his own farm in Richmond until September of 1963. He then was employed by Lipman’s Poultry until they closed in 1983 and worked at Richmond School Department as a janitor until his retirement in 2005.
Chet enjoyed working in the woods, hunting, and fishing and was an avid checker player until his death.
He was predeceased by his parents Arthur and Mildred (Rowe) Allen; three sisters, Ida Allen, Laura Andrews and Irene Richardson; as well as two brothers, Albert Allen and Ashley Allen. Surviving immediate family members include his wife Emily (Drake) Allen whom he married on March 30, 1955 in Livermore Falls; one sister Ethel Cross and her husband Albert (Buster) of Sterling, Alaska; his daughter Deborah Young and her husband Douglas of Pittston; grandson Troy Day of Farmingdale; granddaughter Carrie Day and fiancé Shaine Morris, of Waynesville, Mo; step great granddaughter Sasha Romney of Waynesville, Mo; great granddaughter Aaralyn Beckim of Augusta; along with several nieces and nephews.
The family would like to express their sincere gratitude to the staff of Maine Veterans Home of Augusta Hospice and for the exceptional care Chet received.
Family and friends are invited to visit on Sunday, July 27th from 5-8 p.m. at Kincer Funeral Home.  A funeral service will be held at 11am, July 28th at the Lighthouse Baptist Church 108 Maple St. Farmingdale. Burial with military honors will be at 1pm following the service at the Maine Veterans' Memorial Cemetery, Mount Vernon Road, Augusta.
In lieu of flowers, donations may be made in his memory to the Alzheimer’s Association Maine Chapter, 383 US Route One, Suite 2C, Scarborough, Me 04074.
Arrangements are under the care of Kincer Funeral Home 130 Pleasant St. Richmond, Me 04357.