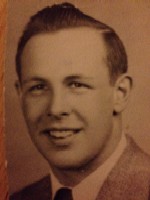 He was born on March 15, 1932 in Bath the son of Cecil and Doris Rowland.Bob proudly served his country in the Untied States Air Force during the Korean War.  He later worked for the telephone company for over 34 years retiring in1989.Bob was a member the Brunswick Area Modelers Club for many years.Bob was predeceased by his parents and a daughter Vickey Erickson.  He is survived by his wife of 61 years Joanne Rowland of Bowdoinham, daughters Mary Kay Dyer and husband Ralph of Bowdoinham, Wendy Fox of Topsham, sister Elizabeth Rowland or Boston, 5 grandchildren and their spouses and 12 great grandchildren.Per Bob's request there will not be any services.In Bob's memory donations may be made to CHANS Hospice 60 Baribeau Dr. Brunswick, Me 04011.Arrangements a under the care of Kincer Funeral Home 130 Pleasant St. Richmond, Me 04357.