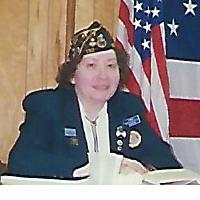 Violette was born in Biddeford, the daughter of Pauline M. (Perreault) Boisvert.  After graduation, she enlisted in the U.S. Navy in 1964 and was stationed in San Diego California.  There she met her husband John Murphy and they were married on April 24, 1965.  Violette was honorably discharged from the Navy in 1965 expecting her and John’s first child.  For many years she was the Personal Property Transportation Officer for the Brunswick Naval Air Station until she retired in 1999.

Violette was very active in the American Legion and Auxiliary of Emmerson & Lane Post 132 in Richmond. She was a past Commander for the post and also held the position of Adjutant for many years.  At the Forth District level she held the positions of First Vice Commander and Commander. She was also a member of Voiture Locale #308 - 40&8.

Violette enjoyed crocheting, sewing, gardening, and raising animals on a small farm in Bowdoinham. She loved to collect mermaids.  She won many first place prizes from several local fairs for her sewing and crocheted creations. In her family, they have a tradition of naming every member with a Disney character name; hers was Goofy.  The name she most loved to be called was Mémère. She volunteered for the youth groups her children were involved in and dedicated many years of service to both Girl Scouts and the local 4H club.

Violette was predeceased by her husband, her mother, her step-father Lawrence Whitten, brother John S. Boisvert, and her long-time companion Donald Kimball.

Friends and family are invited to visiting hours on Thursday, March 12, from 10 a.m. to noon at the Funeral Home, with a Mass of Christian Burial to follow at 1p.m. at St. Joseph Catholic Church, School St., in Gardiner.  Committal will take place in the spring.