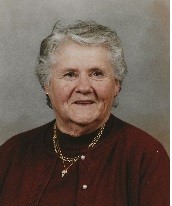 West Gardiner – Rosalie Mae (Wheeler) Andrews 96, of West Gardiner, passed away peacefully on Saturday Feb. 15th, with her youngest daughter at her side, at Gray Birch Nursing Home, Augusta, where she has resided for the past 3 year. She was born on February 1, 1924, in Gardiner. Rosalie was the daughter of the late Lester Alton Wheeler and Berniece Pearl Cunningham.

She was educated in the South Gardiner and Gardiner School system until the eighth grade, at that time she and her sister Catherine went to work at a textile mill in South Gardiner. She worked in retail sales for many years. The last 30 years Rosalie enjoyed fitting the area woman, for there under garments, at Sears Department Store in Augusta, until her retirement at the age of 83. She had a love for learning and reading that she continued to do right up to her last days.

On June 28th, 1946 she was married to Everard Sheldon Andrews Jr., until his death in 2002.  Rosalie loved being a home maker and raising her nine children.

She is predeceased by her sisters Catherine Thornton, Beverly Pease, daughter, Leta Warren, and two sons Dale and Keith Andrews.

The family extends a special thank you and their deepest gratitude to the Gray Birch Nursing Home, Residential Unit staff for their heartfelt care and respect they have shown to both mom and family. A memorial visitation will be held at Kincer Funeral Home, 130 Pleasant Street, Richmond, from 9am to 10am on Saturday February 29th, 2020, with a Remembrance service to follow at 10am.  A reception will follow at FCC (Faith Christian Church), 280 Brunswick Ave. Gardiner.