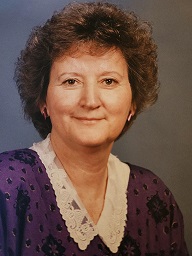 She was born in Gardiner on 12/30/1937 and raised in Litchfield with her two sisters above their family store at Litchfield Corners.  Ida’s musical talents included playing violin and piano.

Ida played basketball and graduated from Litchfield Academy, where she met the love of her life David Greenleaf who also recently passed after 67 years of marriage.  Ida enjoyed going on dates with David to Luigi’s pizza in Lewiston, motorcycling, dancing, gardening, quilting, snowmobiling, and time spent camping with dear friends and family.

Ida’s greatest joy was being a mother to her four beautiful children and a “Mimi” to her 10 grandchildren and anyone else lucky enough to be a part of her life.  She loved hosting large gatherings at Thanksgiving and Christmas time where the pies were never ending and the presents were overflowing.  Ida’s love for family and festivities were evident in her “year-round” Christmas trees that donned everything from Easter Eggs to tiny teacups.

David and Ida’s camp in Manchester was a special place for “Mimi”.  She loved having her grandchildren in the bunkhouse, swims in the pond, flowers down the embankment, and food on the picnic table.

Ida worked at the Augusta YMCA before taking a position with Bath Iron Works.  She retired in her early fifties when she became a full time “Mimi” to her grandchildren.

She is survived by sister Mary Lane and husband Paul of Litchfield, son David Greenleaf and wife Christine of West Gardiner, daughter Linda Hanson and husband David of Pittston, daughter Patricia Greenleaf of Dexter, and daughter Kathy Lawson and husband Brian of West Gardiner.  She is also survived by 10 grandchildren, 22 great-grandchildren, and 1 great-great grandchild, and many nieces and newphews, all of whom will forevermore love and cherish their “Mimi and Papa”.

Per Ida’s request, there will be no services.  A celebration of life for both David and Ida will be held both this winter and in the summer for family.