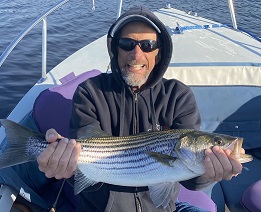 Richmond-James Everett Goranson, 64, passed bravely and peacefully at home August 7, 2022 with his wife Kimberly by his side and immediate family close at hand.

Jim was the son of Everett and Geneva Goranson of Dresden. He grew up on his family's potato farm and graduated from Wiscasset High School. After military service in the Army, he chose to work professions that allowed him to enjoy the outdoors.

Jim’s two loving sons, Jayson Goranson and wife, Kim (their children Marissa, Selene, Makayla, Kaiden) of Topsham and Justin Goranson and partner, Monica Creamer (son Jaxson) of Woolwich, shared many interests.  He cherished time spent ice fishing with his grandchildren, riding his Harley with friends, moose and deer hunting, and tending to his landscape garden at his “House in the Woods”. Cookouts, trips to the coast for a picnic, and home cooking brought him great joy. Anywhere Jim went there was someone he knew. His sense of humor and love for friends and family is felt deeply. All will remember his blue eyes, his infectious laugh & mischievous smile, hugs, and magnanimous personality. Endlessly, he promoted the family farm in Dresden that is operated by his devoted sister Jan Goranson, husband Rob Johanson, and nephews Carl and Goran.

Jim also leaves behind his sister Glennis Wright of Athens,Tennessee, who flew in to be with him, and nephews, Jonathan G.& Adam, his sweet stepdaughter, Jordan Thompson of Whitefield and partner, Adam Partridge and sons Colton & Braydon. His loving sister-in-laws and brother in law, Tammy and Matt Baker of Gardiner, and Lisa Dobson and Mark of Wiscasset spent hours sitting by his side, making him smile. His father in law, John Layton and Alice Merry of Topsham, loved him like a son. Jim’s extended family included two “sons” he had raised as his own, James Andretta of Wiscasset and Thomas Skofield of Jefferson. Precious time was spent reminiscing with his loved cousins, aunts and uncles in his final days.

Jim was deeply grateful for the care he received from his nurses and doctors. Many are left to admire his tenacity, positive attitude, and genuine ability to make each person feel special and share a laugh until the end. He said he lived a great life and he did the best he could.