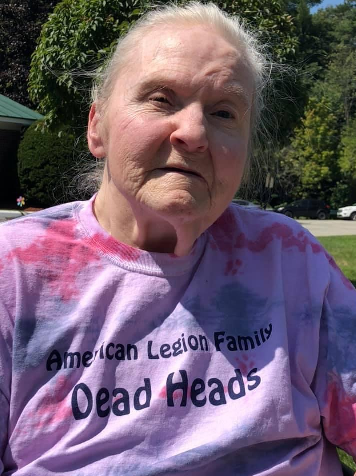 Richmond- Annie L. Hart, died on 4/11/2022 from Parkinson’s with her daughter and son-in-law by her side.
She was born 3/31/1948 to Arthur and Gilberte Apt in Portland Maine, at the old Portland General Hospital and grew up in South Portland.

She worked in various capacities at local shoe shops in both Freeport and Brunswick. She also did at-home work, processing clams, scallops and oysters.

Annie was a 44 year member of the American Legion Auxiliary, where on the unit level, she held the offices of President, first and second Vice President, and Chaplin. She was active in America Legion Auxiliary, Kennebec County, serving as President twice. In years gone past, she spent numerous hours volunteering at TOGUS, at one point completing over 200 hours of volunteer service. She spent many years volunteering at the MVHA, at their Christmas Gift Shop, along with adopting two veterans for Christmas every year. For many years she knit mittens for the children of Richmond. To many, she was known as the cookie lady, as she would bake dozens of her chocolate chip cookies for the Red Cross blood drives, held at Emerson Lane, Post 132 in Richmond.  Over the years, she donated to Camp Tall Pines as well as Special Olympics of Maine, as she always believed that its attendees were out here as Gods special angels. She valued her Legion family and the time spent with them deeply.

She is survived by her Brother George Apt and his wife Pat, her daughter Stella Trahan and her husband Jason, her son Michael Jewett and his wife Erin, her son Jonathan Jewett and his wife Maria, her step-daughter Paula Crochere and her husband Norman, step-daughter Rosa Brawn, grandchildren Carl, Kayla, and Ricky, great-grandchildren Taylor, Ryder, Nolan, Charlotte, Spencer, and her "adopted daughter and granddaughter Michelle and Susan, as well as her much loved and cherished nieces and nephews.

The family would like to thank Androscoggin Hospice for guidance and care. Dr. W. Stamey and his office for their compassion and care throughout this journey.

Visiting hours will be at Kincer Funeral Home on Friday, 4/22, from 1-2:30 pm, with a service at 2:30. There will be a Celebration of Life gathering directly after this at the American Legion, Post 132, Carding Machine Rd., Richmond.

In lieu of flowers, donations can be made in her memory to The American Legion Auxiliary Emergency Fund, Camp Tall Pines of Maine, or the Maine Parkinson’s Society.