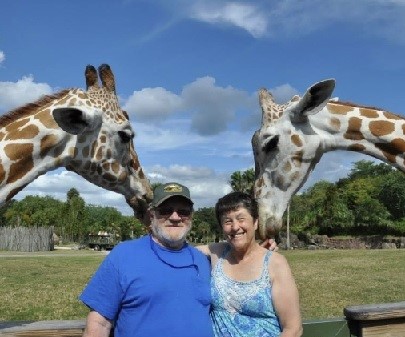 Richmond - Karen Gray Lothridge, 71, of Richmond passed away Thursday March 10, 2022, after a courageous battle with cancer.  She has finally joined in peaceful rest with her husband of 51 years, David, who predeceased her in 2017.

Karen Mary Gray grew up in Gardiner and graduated from the University of Maine Orono.  She married David Lothridge in 1970 and they raised their family and spent the rest of their lives in the home they built in Richmond.

Over the years Karen worked in a variety of interesting occupations from psychiatric care to veterinary care.  Some of her most interesting experiences were from her years as Animal Control Officer for Richmond.  She had a great love of animals and was especially fond of horses and German Shepherd dogs.  Before their retirement, she and David were both long-time knitters for Christmas Cove Designs.

Karen enjoyed crocheting as well as knitting and has left her family with several sentimental items of her handy work.  She was also a lifetime member of Weight Watchers and loved to cook, perfect, and share her healthy recipes.  She will be remembered fondly for her crazy sense of humor as well as her uncanny ability to hunt down a bargain.

One of Karen's favorite places to spend time was at Knights Pond Camp which has been owned by her family for generations.  Along with David, her brother-in-law Gary, sister-in-law Lauralei, and those family and friends willing to leave cell phone service behind and brave the bumpy dirt roads and the buggy trail in. Karen spent countless hours walking, reading, bush-hogging, mucking and being hard to beat at cribbage.

Karen's greatest love, however, was her children and grandchildren.  She cheered loudly from the sideline at their school team games and stood tall beside them for photos when they graduated.  She proudly shared their accomplishments with family and friends.  She worried for them when they set out in life on their own and made sure they knew they always had a place they could call "home".

In addition to her husband, Karen was also predeceased by her parents, Robert and Doris Gray; her brother Jeff Gray; her sister Nancy Rogers; and her like-a-brother brother-in-law Gary Lothridge.

There is a sunny knoll beside the camp at Knights Pond.  It overlooks the water.  Chipmunks scamper by.  Canadian Jays glide down.  An occasional moose grazes in the nearby inlet.  Loons swim silently past.  Beautiful sunsets grace the sky together forever watching over Knights pond.

Arrangements are under the care of Kincer Funeral Home, 130 Pleasant Street, Richmond.