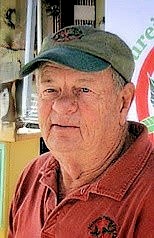 Richmond- Harold Wright Brown, 83, of Richmond, passed away peacefully, surrounded by family, on January 25, at the Androscoggin Hospice House in Auburn. Harold was born in Gardiner, Maine on October 20, 1938, to Harold Alexander Brown and Zelma Jane Brown (nee Wright) also of Richmond. He graduated from Richmond High School in 1957 and from the University of Maine Orono in 1959. In 1962, he married Dolena McIntire Petroulis of Lewiston, who was widowed.

Harold enjoyed spending time with his children, grandchildren, great grandchildren and with his dogs. He loved the Patriots, the Red Sox, taking drives along the coast, gardening, golf and craft fairs. Harold, a lifelong dairy farmer, was active in 4-H, the Farm Bureau Association, various legislative agricultural committees, and the local school board.

Harold was the owner and operator of Brownrite Farm, a large dairy farm located along the Beedle, Brown and Weeks roads in Richmond. He was the last of four generations to operate the farm. Harold was a past Maine Dairy Farmer of the Year. In 1972, a Holstein junior yearling, which was bred and raised on the farm, won top national honors, winning the coveted All-American Award. No other Holstein from Maine has ever won this award.

Harold sold the farm in 1989 and became a real estate broker for a short time before joining Fleet Service, a Gardiner-based business owned by his son, Paul Petroulis. After 16 years with Fleet Service, Harold started a small business, Nature's Poison Ivy Relief, producing and selling an all-natural poison ivy rash relief product, that he made from sweet fern, a plant that grows along the edge of forests and other open areas. He had much success marketing and growing this unique business in his "retirement" and even more fun distributing the product to over 60 stores throughout New England, at crafts fairs, and via the internet.

Harold was predeceased by his parents, his sister, Charlotte Brown Labbe of Waterville, and his wife, Dolena, who passed away in 2008. He is survived by five children, Barbara Petroulis of Boston, Kathryn Petroulis Kiplinger (Herman) of Bath, Paul Petroulis (Terri) of Richmond, Nancy Brown Pollock (James) of Richmond and Jane Brown Crowley (Larry) of Chapel Hill, TN, in addition to grandchildren (Mac and Christine Devlin, Nick, Ana and Alex Petroulis, Jessie, Katie and Christopher Pollock, and Brianna and Ryan Crowley, 8 great grandchildren, nephews and a niece.

Harold and the family thank Teresa Fuller of Hallowell, for assisting him with daily house chores, medical appointments, making wonderful homemade meals, dining out, occasional short trips and for her many years of loyalty and friendship.

Harold will be buried in the spring in the Litchfield Plains Cemetery. In lieu of flowers, the family requests donations be made to Androscoggin Hospice House, 236 Stetson Rd, Auburn, Maine, 04210.