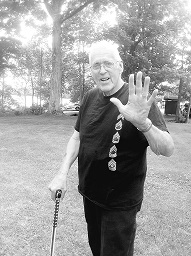 Pittston-Lawrence A. Dearborn Sr., (Formerly of Richmond, Me) passed away January 22, 2020 from Alzheimer's, Dementia and Parkinson's with his wife Rita and family by his side.

Larry was born Nov 6, 1934 in Richmond, Maine, the son of Arthur and Viva (McKenny) Dearborn. He graduated from Richmond Schools and enlisted in the United States Army as an Infantry Soldier in 1953, where he proudly served his country, for as he would like to say, "20 years, 3 months and 21 days".  During his military career, Larry served at numerous duty stations in the US., while in the Army, as well as bases overseas.  He also served one tour in Korea in the DMZ and two tours in VietNam.

Larry is probably remembered by many as the most patriotic person they knew, driving an American Flag painted Limo in support of active duty, retired and deceased veterans. He made it his life’s goal to make sure every veteran, alive or deceased, was treated with respect and honor.

Larry was predeceased by his parents, former wife Gisela, an infant daughter Christine, sister Thelma Prout and her husband Joe, sister in law Rachel Dearborn and mother in law Marjorie A. Muse.

Larry's wife would like to thank the following for all their help and support: Androscoggin Home Healthcare & Hospice, Bill & Lynne Stephens of Pittston, and Jennifer Laflin of Gorham.

Family and friends are invited to visit on Saturday, January 25th from 11am to 1pm with a funeral service to follow at the funeral home.