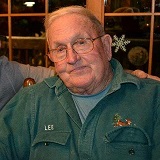 Richmond-Leland J Smith, 88, passed peacefully on Friday, August 23, 2019 with his family by his side.

Lee moved to Richmond when he was nine-years-old and resided there for the rest of his life. He met his wife as a teenager and they just celebrated their 71st anniversary. He was a hard-working and wonderful man with amazing strength. He was always loving, caring and generous. He was well-known for his character and integrity.

He served Richmond as a constable for several years. He was president of the Richmond Sportsman’s Club and was always an active member. As a young man he was a worm-digger and later lumber-jack. He owned and operated Lee Smith Logging for many years and he became the epitome of the word LOGGER. He also owned and operated Smith’s Smelt Camps for 20+ years. He was an avid hunter and lived for hunting season. He was also a skilled trap shooter and over the years he won many state titles. In July 2019 he was inducted in the Maine Trap Shooters Association Hall of Fame.

Family and friends are invited to visit from 2 to 4pm on Sunday, August 25th at the funeral home with a celebration of life to follow at 4pm.

In lieu of flowers contributions can be made to: The American Heart Association 7272 Greenville Avenue; Dallas, TX 75231-4596 or the Travis Mills Foundation 747 Western Ave. Manchester Maine 04351.

Arrangements are under the care of Kincer Funeral Home 130 Pleasant St. Richmond, Me 04357.0