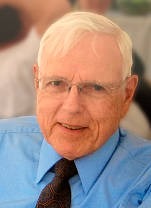 Hod was loved by all who knew him and will be remembered as a devoted husband and father known for his intelligence and authenticity, his kindness, and his wry wit and love of puns. He grew up in Newtonville, Mass. and was educated at The Cambridge School of Weston, then Oberlin College, where he met his wife, Mary Ann, and after a trial year at Yale Divinity School, he switched to Asian studies at Yale, where he received a master’s degree, then went on to earn his doctorate in international relations at the Fletcher School of Tufts University. He taught Asian history at the University of Vermont until teaching positions at Cal State Hayward and then Loyola Marymount took him and his young family to California. Later in his career, he established Briggs Reporting Company, Inc., an electronic court reporting firm.

Hod’s interest in Asia was sparked by the two years he spent with Mary Ann teaching English at Tunghai University in Taiwan right after graduating from Oberlin; this was an experience they both remember fondly as the magical start to their 64 years of married life.

Hod was also devoted to two family homes: one in the White Mountains of New Hampshire; the other on a Maine island. He enjoyed exploring the varied landscapes of the U.S. with his wife and children as they traveled by car from California each summer to visit these family homes.

Hod was predeceased by his parents and his sister, Jean Louise Briggs. He is survived by his wife Mary Ann (Thiergartner) Briggs; their three children, Stephen, Susan, and Jeffrey Briggs; his older brother William and Jean (Webster) Briggs; his sister, Meg Worcester; and numerous cousins, nieces, nephews and their children and grandchildren.

In keeping with Hod’s wishes, there will be no formal service.

The family wishes to thank the wonderful care team at Mid Coast Hospital in Brunswick for keeping Hod comfortable in his last days and for providing kind support to his family during that time.