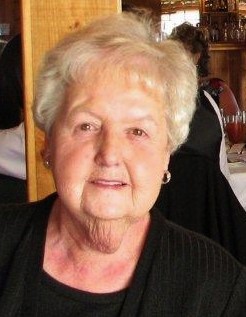 Surrounded by her children, Jeanette Rodrigue, formerly of Farmingdale, passed away on November 18, 2015.

Jeanette was born in Augusta, Maine on September 9, 1931. The daughter of Romeo and Mathilda Bellavance, she grew up in Richmond and graduated from Richmond High School.

In 1949, Jeanette met Kenneth Rodrigue. The story goes that even before they met, a friend showed Ken her picture and he said, “that’s the girl I’m going to marry.” They married in 1950, living briefly in South Carolina while Ken was in boot camp for the Marine Corps, but ultimately settling in Richmond.

Together Jeanette and Ken raised five children. Mom was never happier than when she had a baby in her arms. She was also a talented pianist, filling her home with beautiful music every day. Not one to be idle, once all of her children were in school, Jeanette worked as a hairdresser in her mother’s beauty shop, then known as “Tillie’s Beauty Shop.” In later years, Jeanette purchased the shop from her mother and became the small business owner of “Jeanette’s Beauty Shop.” She was hairdresser, accountant, laundress, and personnel director for her business. She managed this and never missed a soccer or baseball game, piano recital, or play in which her children participated. In her retirement, she volunteered at the Alzheimer’s Center in Gardiner and played the piano for the residents of the Maine Veteran’s Home and Glenridge.

Jeanette’s greatest loves were her children, grandchildren, and great-grandchildren. She was the best grandmother any child could wish for, making sleepovers fun with favorite books, movies, music, and unlimited hugs. She and Ken delighted in attending their grandchildren’s band concerts, soccer games, piano recitals, and they were a fixture along the first base line at the Hall-Dale Little League field.

The family would like to thank the staff at Glenridge for their compassionate care, their friendship, and especially for their support through some of our saddest times. They are our heroes.

Family and friends are invited to visit Saturday, Nov. 28 at 11 a.m. at Kincer Funeral Home, 130 Pleasant St., Richmond. A funeral service will follow at noon.